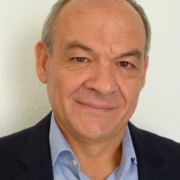 Prof. Manolopoulos obtained a PhD from the Medical School of Patras University in 1991. Between 1992 and 1995 he was a postdoctoral researcher at the Milwaukee Clinical Campus of the University of Wisconsin. Then he took a post as senior research scientist at the Medical School of the Katholic University in Leuven, Belgium, between 1995 and 1998. Since 1998 Dr Manolopoulos has been in a faculty member in Alexandroupolis teaching basic and clinical pharmacology to medical students. Also, since 2001 he has developed and teaches a course in Pharmacogenetics (since 2015 renamed to Pharmacogenomics and Personalised medicine), one of the first to be introduced to the Medical School undergraduate curriculum worldwide. He has authored more than 115 indexed publications that have received more than 2900 citations, h# 30 (Scopus), including 3  in New England Journal of Medicine, in one of which he was the corresponding author (NEJM 369:2304, 2013). His current interests include research and clinical applications of pharmacogenomics and epigenetics in drugs used in anticoagulation, diabetes, psychiatry, and oncology. In addition he has a long-standing interest in endothelial cell physiology and atherosclerosis. He has received funding for his research from national and international funding bodies. He directs a Masters’ Course in Clinical Pharmacology and Therapeutics and heads the Research Committee of his Medical School. He is the president of the Greek Society for Basic and Clinical Pharmacology and also participates in the Executive Committee of the European Association for Clinical Pharmacology (EACPT). He is the President-elect of ESPT.

This is a notification that can be used for cookie consent or other important news. It also got a modal window now! Click "learn more" to see it!

We may request cookies to be set on your device. We use cookies to let us know when you visit our websites, how you interact with us, to enrich your user experience, and to customize your relationship with our website.

Click on the different category headings to find out more. You can also change some of your preferences. Note that blocking some types of cookies may impact your experience on our websites and the services we are able to offer.

These cookies are strictly necessary to provide you with services available through our website and to use some of its features.

Because these cookies are strictly necessary to deliver the website, you cannot refuse them without impacting how our site functions. You can block or delete them by changing your browser settings and force blocking all cookies on this website.

We also use different external services like Google Webfonts, Google Maps and external Video providers. Since these providers may collect personal data like your IP address we allow you to block them here. Please be aware that this might heavily reduce the functionality and appearance of our site. Changes will take effect once you reload the page.